This year we have eight limited-edition cask strength whiskies selected by master blender Dr Craig Wilson. The theme for Diageo’s 2019 Special Releases is “Rare by Nature”, which seems to evoke the old Flora and Fauna range with some beautifully dramatised illustrations of the wildlife, and flora surrounding the distilleries depicted on the packaging. We were lucky enough to try them all at a pre-release event at Somerset House in London, here are our thoughts and tasting notes: 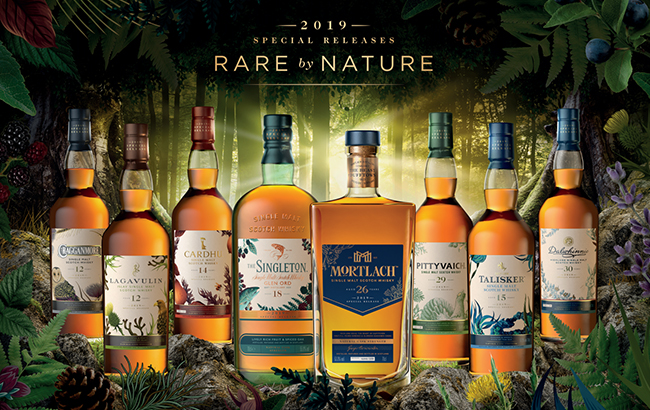 The 2019 Diageo Special Releases in their entourage

A rare outing for this North Highland distillery that is one of Diageo’s largest distilleries, and also doubles as the malting site for the barley is used in many of the companies single malts. The whisky was matured for 18 years in freshly charred American oak hogsheads, from a 2000 distillation.

Overall: The signature “smooth and balanced” style is evident here but with the extra strength, some richer more oily body to the Glen Ord style.

Described as “The Queen of Speyside malts” and the spiritual home of the Johnnie Walker brand, again this whisky is rare to see. An aged cask strength release of Cardhu which spent 2 years being finished in Amontillado sherry seasoned hogsheads, after its initial ageing in traditional refill casks.

Overall: Classic soft and creamy Cardhu with added depth, complexity and spice for a most easy going Speyside malt.

The big surprise of this year’s releases is a rare peated expression from the highly-respected Speyside distillery, Cragganmore.  The whisky was distilled in 2006 and matured in refill American oak casks.

Palate: Opens with barley sugar/boiled sweets then developing an unusual smoky and savoury edge to the waxy citrus-led body. Some notes of chocolate bitters and forest floor mulch.

Finish: More waxy and citrus curd like notes with smoked oatmeal, herbal honey and a lingering hint of a distant forest bonfire.

Overall: An unusual Cragganmore for sure but for me one of the highlights of this year’s releases. A real collector’s item from a classic Speyside malt never to have released as a peated version before.

With no Brora or Port Ellen in the line-up this year it is down to “The Beast of Dufftown” to deliver the big hitter. The whisky was distilled in 1992 and aged for 26 long years in first-fill Pedro Ximeénez and Oloroso Sherry seasoned casks.

Overall: An Umami rich Mortlach that will keep all the sherry bomb lovers happy; big, bold and meaty and more than justifying of its price tag.

The oldest of this year’s releases, from a 1987/88 distillation and matured in a combination of refill hogsheads and butts.

Palate: Deep and waxy to start settling into quince jelly and ripe orchard fruits behind a silkscreen of singed grass and herbs. Becomes creamy and peppery with a sort of oaky muesli/granola bar enjoyed near a leafy bonfire perhaps.

Overall: Always a reliable and good all-rounder of a Highland malt, and here well-aged displaying great poise and elegance for its 30 years.

A ghost distillery that was closed in 1993 after just 19 years of distilling. A rarely seen Speyside single malt with ever dwindling stock, and here matured in freshly charred American oak hogsheads.

Nose: Opens with elegant floral and fresh sponge cake from the oven. Lavender and sugared almonds and all quite delicate and austere, with a mineral like touch and some loose leaf tea.

Overall: The most delicate of this year’s offerings from a distillery, as rarely seen as the shy Capercaillie bird found in the Scottish pine forests that surround the site of this lost distillery.

Another aged offering from this iconic Isle of Skye distillery, and after last year’s triumphant 8 year old it has a lot to live up to. The whisky was matured for 15 years in 100% freshly-charred American oak hogsheads.

Nose: Classic maritime and harbour-side character with some lobster pots and boggy seaweed in here too. Some sweeter elements of lavender honey and Szechuan pepper. Soy sauce/seafood marinade and tarry smoke complete the most complex nose of this year’s Special Releases.

Overall: Sure to be many peoples favourite of the 2019 releases. After last year’s 8 year old that makes two stunning Talisker releases in a row, and the first ever official bottling at 15 years old.

With no Caol Ila in the line-up this year it’s up to the yearly stalwart of the Lagavulin 12 year old to represent the Islay contingent. As always it’s proven to be the best value offering, this time distilled in 2006/07 and matured in refill American oak.

Finish: Oily and sooty with vegetal, earthy compost heap notes balanced by boiled sweets. Mossy rock pools and vanillin oak bringing some sweetness and freshness to what is a long and satisfying finish.

Overall: An ever reliable annual offering in the Diageo Special Releases, which again steals the show as being the last-tasted that lingers long into the night. A superb dram from a distillery that seems incapable of releasing anything other than impeccable distillery character with every release.

All eight of this years whiskies are now available to order with free UK shipping on our Diageo Special Releases 2019 page.

For past releases from previous years, you can check them out on our Diageo Special Releases page.